56.1 Importing from other software

We are aware of the initiative to make qualitative coding software interoperable, https://www.qdasoftware.org/products-project-exchange/. Causal Map has quite a different model and at the moment we don’t provide this, but would do if there is a lot of interest.

You can always export all your data at any time using the buttons in the File tab.

56.1.1 Exporting for import into kumu.io

56.1.2 Exporting for import into NodeXL

You might already have causal information, for example in the form of node and edge lists, which you want to import. This is possible in Causal Map. You simply provide an Excel xlsx file with a single tab called links, containing just two columns called from_label and to_label which contain the names of your factors.

If you give the app a single set of closed responses like better, worse then it can make tables like below.

It will recode a fixed set of words into + positive, - negative and 0 neutral.

This approach only makes sense if you have one larger set of questions with the same set of fixed reply options.

You supply this data in the form of user-defined fields in the Sources table, whose names contain a *.

You could still, if you want, import a whole bunch of different closed questions with different answer categories as custom fields in the Sources table. So just as you can have gender as a field, you could have “answer to closed question about how often do you go hungry (never/sometimes/often)” as a field. This means you could ask the app to only show the maps of the women, or the people who often go hungry, or the women who often go hungry. The point of the closed questions feature is to organise and provide the answers to a whole block of questions together in one place, to make analsying the data easier.

This format is used by BathSDR for QuIP projects. This format has many rows, one for each answer, and includes the statements as one kind of answer; you can import statements and additional data from the same fieldwork file.

The app will only read the first tab in the Excel file, whatever its name. This tab must have a header row with the names of the fields:

(Actually the names of the columns does not matter, only the order.)

This hybrid data is split on import into three tables: statements sources and questions, depending on the contents of the question_code column. These question codes may include the following characters:

Plus, the question_code may end with the characters “rank” to mark “ranking organisation” data. [There may be a bug currently such that this data will also be imported only if they are not treated as statements, ie the code should not contain a $]

The three tables are produced as follows:

You can mix the special characters in the question codes, so e.g.

… will be treated as

Note that all the columns of the sources table contain metadata about your sources and can for example be used to create filters (e.g. show me a map which only contains statements from people who live alone). Data whose question_code contains a # will also be shown in a few additional key place in the app such as the info panel.

Closed question block data, and ranked organisation data, is stored in the app in the sources table: as additional columns of information about each source.

Using this table (which includes spanish) the app recodes your data into + positive, - negative and 0 neutral. 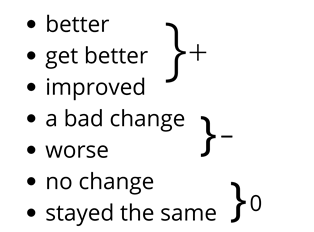 This data will be displayed in the Tables panel if you select “closed questions.”

Suppose you uploaded hybrid data from file F, and already did some coding, then you receive more data in file G, also in hybrid format.

Find the original file F on your computer (don’ t download from the app!). Paste the data from file G below the existing data in file F, save it as file H, and upload this again. Your existing coding should not be affected; the links and factors you already created will remain.

Caveat: you can’t combine roundtripping and appending hybrid data. If you have tweaked or added to your data from file F by roundtripping (downloading the data from the app then uploading again), any changes to statements, sources or questions will be lost if you later try to append data using this hybrid button. So if you need to tweak your data (statements, sources or questions), either:

You want to merge files “foxtrot”, “golf”and “hotel” into one. What you are going to do is create a blank file and then use the merge mapfile command to merge in the file foxtrot, and save the map as currently filtered (i.e. including all the contents of foxtrot which arrive via the filter), and then repeat for the others.

You can verify the number of imported links like this: 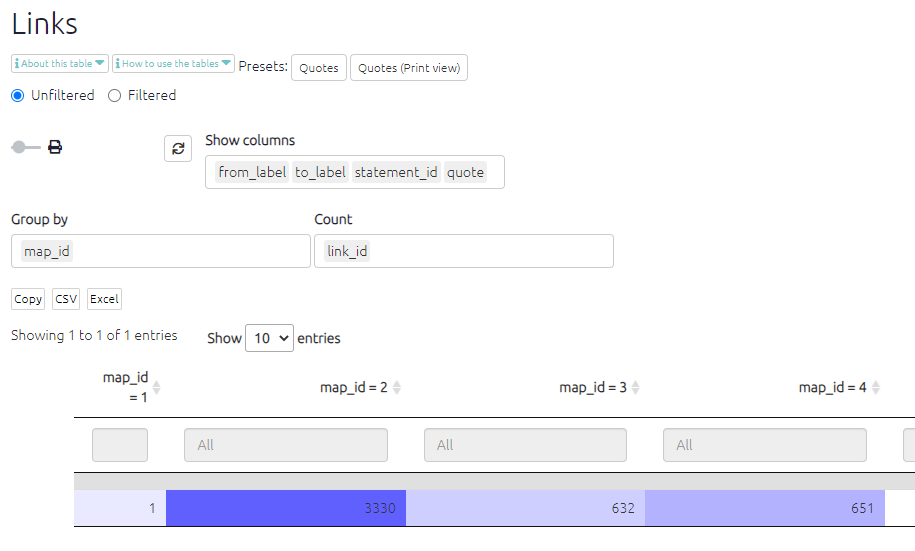 If you wish, you can roundtrip the file to add a column called, say, original map in the links table next to the column map_id which contains names rather than numbers to make it easier to remember what is what. In any case you can use the map_id (or original_map) fields to filter and/or format the map however you like